The Classic Phoenix Steakhouse For Meat-Lovers and History Nerds 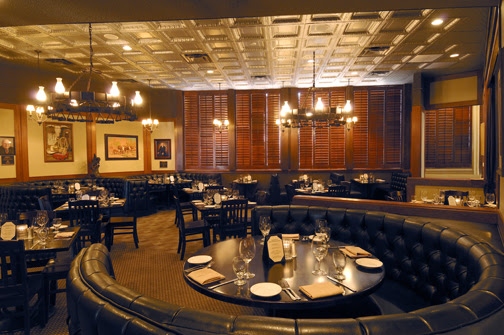 Welcome to The Essentials, our catalog of indispensable and quintessential Phoenix food and drink. From now until May, we’ll be sharing 50 dishes, drinks, and food experiences that make up the culinary backbone (and personality) of metro Phoenix. This list is highly eclectic, mixing classics with newer and lesser-known favorites. But all The Essentials have one thing in common: We think they’re required eating (and drinking) in metro Phoenix.

16: Steak Dinner at The Stockyards

There might not be a better place in Phoenix to connect with the city’s cow-town heritage than The Stockyards.

The classic Western steakhouse has been a landmark on Washington Street for decades, as ingrained into the local landscape as nearby Tovrea Castle and the bright pink Papago buttes in the distance.

Its modest-sized neon sign evokes the fire-hot, orange-red glow of an Old West branding iron, and there’s something comforting about driving by at night and catching a glimpse of the sign in the darkness.

There are certainly much more upscale steakhouses in town, especially up the road in Scottsdale. But The Stockyards has in part remained a perennial favorite with tourists and locals because it preserves a small piece of local history. It’s a vivid reminder of a bygone period when Phoenix was home to one of the biggest cattle feedlots in the world, and it proudly celebrates its status as one of the oldest restaurants in town.

Like any older restaurant, The Stockyards has gone through its share of changes over the years (including a compete reconstruction after the original restaurant was destroyed in a fire back in 1953). The restaurant went through a redesign about a decade ago, landing on a New West aesthetic that relies less on highlighting cowboy-themed kitsch and more on celebrating local history.

You can see proof of the city’s cattle days for yourself in the restaurant’s hallways, which are filled with fascinating historic aerial photographs of what the east side of Phoenix looked like back in the early 20th century. The restaurant also displays portraits of famous young cowboys, and original art by now-legendary Western artists like Lon Megargee. History buffs, even vegetarian history buffs, will be rewarded at The Stockyards, which feels almost as much an incidental historical society as it does a full-service restaurant.

But it’s foremost a restaurant, and the food and service is consistently good. The signature steak is probably the 24-ounce, beautifully seasoned, bone-in rib eye, known here as The Arizona Cut, which comes with all the classic steakhouse sides.

The Stockyards is also a good source for harder-to-find wild game steaks like elk and boar. And if you’ve ever wanted to try Rocky Mountain Oysters, or Calf Fries — i.e., calf bull testicles — The Stockyards will provide. It’s worth noting that, even with its fairly casual ambiance, The Stockyards is still a higher-end steakhouse, so you can expect to pay somewhere in the neighborhood of $50 for one of the restaurant’s signature cuts.

When you come to The Stockyards, it’s worth coming early to spend some time in the restaurant’s bar, which features a glittering chandelier; bright, Western-themed murals; and gorgeously intricate mahogany wood carvings behind the bar.

It has the darkly elegant airs of a hidden-away Western saloon, minus all the hokey trappings that you sometimes find at popular tourist destinations. So, come for a drink, stay for a steak, and toast to the quiet longevity of one of Phoenix’s oldest restaurants.