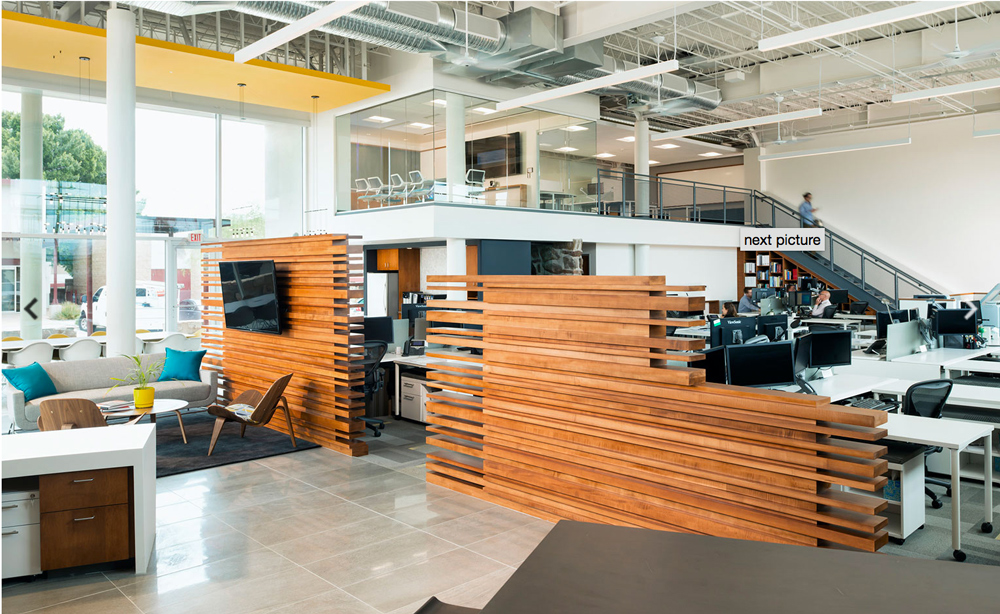 Architecture and interior design firm Cuningham Group has moved into its new Phoenix office, a mid-century modern landmark designed by William Pereira. Completed in 1951, the Farmers & Stockmens Bank building is listed as a historic structure by the City of Phoenix Historic Preservation Office.

Cuningham Group, which has its head office in Minneapolis, had its eye on the building long before the lease on its previous Phoenix office was up. The Phonenix branch of the firm, which employs 40 architects and interior designers, specialises in local and international healthcare, multi-family and senior living projects.

Serendipitously, the team had a dinner celebration in a restaurant nearby to the building. ‘We all walked over and peeked inside and were mesmerised by its beauty and its potential as our future new office,’ says Nabil Abou-Haidar, principal in charge of Senior Living at Cuningham Group.

Strongly horizontal in emphasis, the iconic building has a long flat roof that overlaps an exposed stone bank vault. Pereira, known for his a sci-fi inspired designs such as the Transamerica Pyramid in San Francisco and LAX’s Theme Building, was influenced by Frank Lloyd Wright for this design.

The building was in a restoration phase by the owner, Jokake Real Estate, to bring the exterior back to reflect Pereira’s original work – ‘the last tenant had replaced some of the original exterior glass with stucco wall panels thus compromising the original character,’ says Abou-Haidar – yet Cuningham Group kept an eye on its progression and when the time came for them to move it was ‘no brainer’.

Cuningham Group took charge of the interior design to bring it up to scratch to suit their working needs. ‘The historic building interior had been completely removed by previous owners, so with our interior build out, we started with an empty shell – only the historic stone bank vault remained,’ says Pete Mikelson, Senior Associate at Cuningham Group.

‘The open and flexible volume of the building interior was already ideal for a contemporary work place. Our goal was to preserve that, and augment with simple, contemporary design moves that respected the original architecture. The linear forms of the millwork, materials palette and furniture pieces were all intended to create an “updated mid-century modern” feel,’ he says.

‘There is a quality to the space that is hard to describe,’ says Abou-Haidar, who appreciates working in the building on a daily basis. ‘Being in such an iconic building that inspired many others after it in the Phoenix area, is very energising especially for architects who appreciate good design.